Taxes…like a week from now.

You know the drill.

p.s. this is for the new/latest/something version of Numbers.app that broke all the stuff and things. meh?

By graciously patient reminder from the organizers, I'm posting my slides from CouchConf in Vancouver last year. 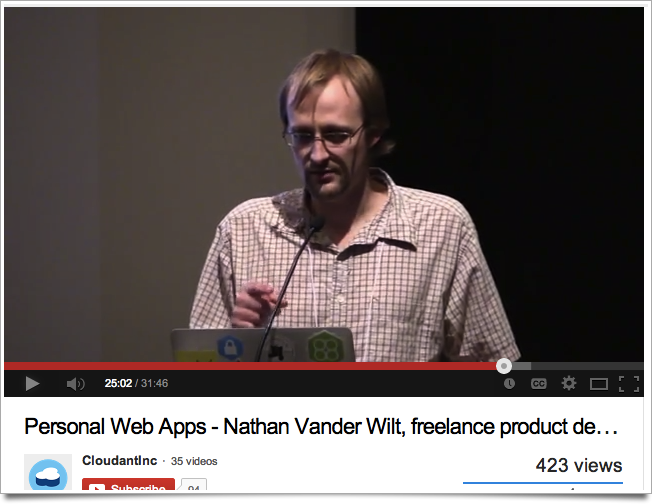 My talk was called Building Webapps with CouchDB [pdf] and was basically a wonderful privilege to show off some of the variously handy/silly/ambitious Couchapps I've built through the years. The video of my talk was posted in a much more timely fashion and already has an encouraging (or disturbing? ;-) number of views. There were a lot of great talks you can watch all the videos for; Joan Touzet had a great "FAQ"-style talk that should probably have a prominent place in the docs and Jason Johnson had a really fun talk about storage hardware, just to name two.

And, while I'm posting under this title, a few years ago I also gave a talk at two Couchbase "World Tour" events (in Portland and Seattle) called Scaling Geodata with MapReduce [pdf] which gives more details on how I pulled off some even crazier location handling stuff with LocLog than mentioned in my Vancouver talk. (I don't think videos were posted from that, though IIRC someone had a camera rolling…will update if I find out otherwise.)

"Brain on drugs" pun intended, perhaps. I like D3.

And use it for juuuust about everything. 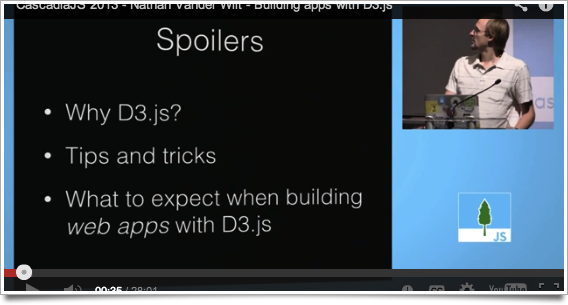 In that vein, I gave a talk late last year on "Building apps with D3.js" at CascadiaJS 2013. Personally, I um can't uuuuuuh stand um uhh to watch um, myself uh talk. But I did have several people tell me the presentation was nonetheless encouraging/inspiring (thanks!) so I guess I should promote it a bit…. You can find the video here and I've also posted my slides (pdf).

CascadiaJS (and CouchConf the day before) was great, by the way. As I nervously suspected, I had to give my talk to an audience that included the very people who are busy making frameworks actually intended for building entire web apps. But once that was over I could sit back and enjoy a fantastic time with friends old and new. 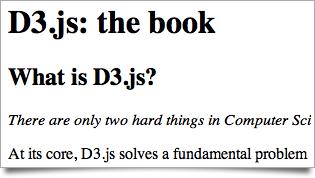 You might remember that last year I also started writing a book on D3.js, but couldn't afford to finish it. Well, I recently got official notice from the publisher that they have voided the contract! So that work is now mine to do with as I please. Since I still don't have enough time to make a proper job of it, I'm simply sharing what I had started when I stopped.

Ironically [or perhaps unsurprisingly?] enough, I've recently been asked to do a technical review on someone else's D3.js book. It is indeed a lot easier to critique than to create!

Anyway, last year was a big year for D3.js adoption. It will be interesting to see what comes in 2014 out of Mike, et al's great little library.

Lately I have fried:

I've been getting the second iteration of my greenhouse electronics going as well as developing a mostly-finished pure-JavaScript nRF24L01+ driver library. In the process I've managed to downgrade the radio hardware on a few of these little transceiver breakouts: 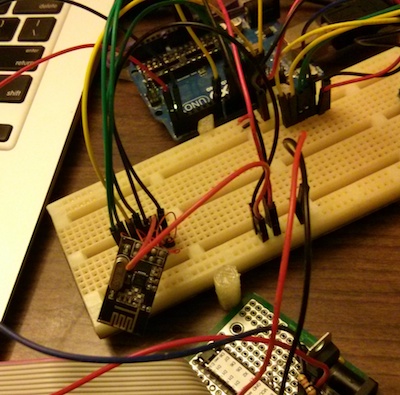 It's hard to casually explain what I'm doing with these to family and friends, but the short of it is they're a fairly ideal and very affordable way to wirelessly connect a variety of tiny computers — Arduino, Teensy, Raspberry Pi, Tessel, etc.

My patience with CouchDB

Don't get me wrong, I still use it and love it but I am also getting more shy of always recommending it by default. It's not that CouchDB broken, it's just that it is incomplete in the areas that would truly set it apart.

It's not my only concern, but the biggest struggle has been with document-level read permissions. Turns out this is critical for anything resembling a "Couch App". Filtered replication simply isn't the solution. Cloudant has done some work in this regard, but given the functionality hasn't even made it to their public product's roadmap it seems unreasonable to plan for it in an Apache CouchDB release for a very long time.

In the meantime, I'm just slathering middleware over everything "database" in my production work, where I've had to salvage my original CouchDB-in-theory architectures. There's certainly still plenty Couch improves about these projects, but it can be frustrating to re-implement so much of what it should provide while still constrained by its remaining baggage.

Cold weather and tropical fish don't mix well. Many of my tilapia are about harvest size but I'd been hoping to keep the full batch until I had conjured a second generation out of them. This plan was decimated as a two week long extra-cold snap left all but the three smallest fish comatose on the bottom of the tank. They may have pulled through, but with travel approaching I didn't want to chance it. 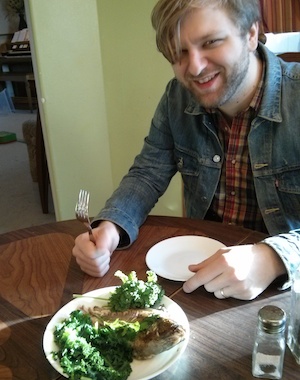 The first to succumb got ate for breakfast with a visiting friend; the next four got stored in the freezer. With a second aquarium heater and a closer-to-average climate, the temperatures seem to be in a better range — up from 40–50ºF to the 60–70º range without having to wastefully heat the greenhouse air directly.

We recently added some meat rabbits to our menagerie. Given the cold snap I was eager to install a freeze-proof automatic watering system before it was the neighbors' turn to take care of things. 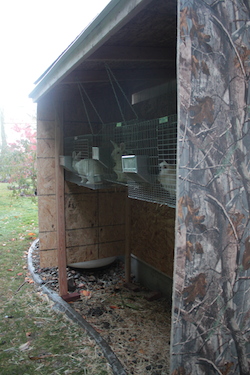 Excited by a successful afternoon of assembly, and eager for the glue to cure, I plugged in the heat cable "for just a bit, to test it" — without any water in the system. An hour or two later I realized this was in progress in the hutch right next to our house… 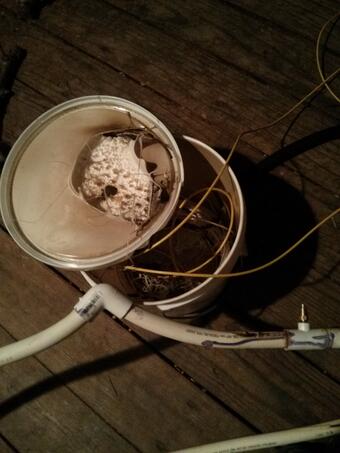 A dozen of these were hurriedly harvested and snacked upon amidst the final holiday packing. Toby managed the butter sauce mostly by himself, but only Malachi was willing to try the end product with me. 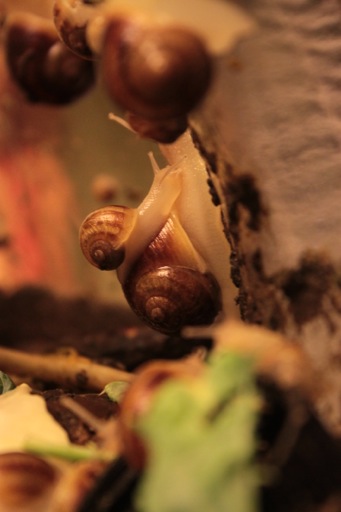 I forgot to snag a picture of the actual snack. To be honest, not only were we eating in a hurry but I was also trying not to focus on their entrailish appearance…I hope to keep raising and sampling them, though, as they haven't required too much attention.

Keeping up with so many outdoor-ish and unbillable-ish projects has been a bit of a challenge while also trying to share brief daylight hours with consulting/development work, but has been incredibly educational. When things "just work" it's only a little empowering. Doing things the wrong way (or the long way) can be tough to swallow, but with persistence feels rewarding in a more satisfying way.

Two browsers walk into a bar. The bartender introduces them, then the horse says to the Ukrainian: "

So anyway, you've maybe heard of PouchDB, an IndexedDB (and WebSQL and LevelDB and HTTP…) wrapper that is replication-compatible with CouchDB. And maybe you've heard also of WebRTC, a browser API for "real-time communication" between peers.

Well, I combined the two.

It's called PeerPouch and it seems to work. In theory and practice. Basically it adds still another backend to PouchDB, which proxies all calls on the local instance to one on another peer. Connection setup itself is done via a PouchDB/CouchDB instance too. So it's Pouches all the way down.

I'm worried there's no easy-win use case due to the usability issues of combining browser storage (confusing) with peer-to-peer connections (uncertain) while still requiring mutual access to a central server (there's always a catch), but PeerPouch could be helpful for things like:

PeerPouch itself is super simple to use. So I'm thinking combined with an in-memory PouchDB backend it could join the ranks of WebRTC wrappers for generic chat/game/whatever apps disregarding the data storage PouchDB usually offers. The advantage would be not require anything more than a potentially-free IrisCouch or Cloudant pre-hosted server backend for signalling.

To demo/test it, I built a no-frills direct file transfer utility which I hope to get hosted once I get a suitable server backend ready for shared public consumption. Metakaolin is also high up on the list for some peerish collabification. Have you got any projects where this might be useful?