I started building Argyle Tiles to provide a beautiful and global satellite/aerial imagery dataset, with as few license restrictions as possible, because in a world where generating a custom street map has become almost trivial, I felt this complimentary service was still lacking. Seemed like it was high time someone did it, and tried to do it well.

Last week, MapBox released a gorgeously processed imagery layer as the newest part of their service offerings — they've gathered up all the great public domain data that was on my list and delivered it already. And they're not stopping there. I've long been a fan of their work (the open source tools MapBox has shared are a big reason OpenStreetMap data is now so easy to display), and I'm confident they will be able to deliver on their announced plans for MapBox Satellite.

In light of this, I'm scaling back plans for Argyle Tiles as a business. 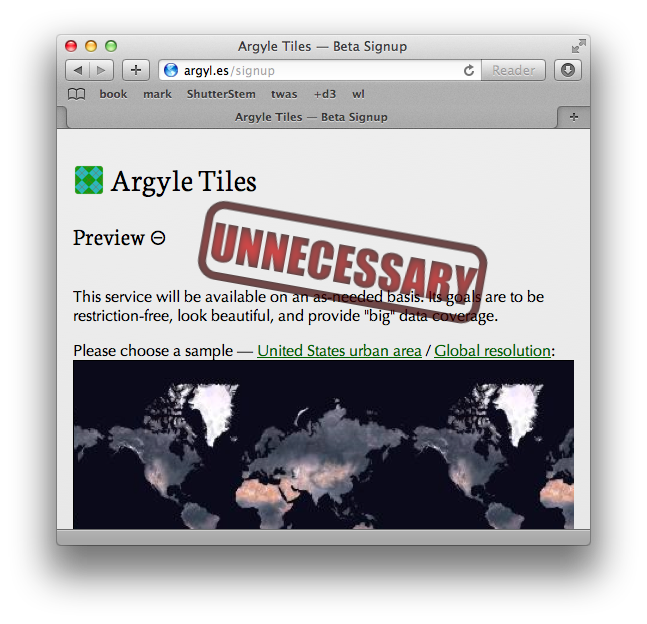 I had already been struggling with how to deal with the encouragement I'd received: everyone was eager to see the product done. As in, "Let us know when it's done!" At the rate I was able to personally invest in the project, it would have been many more months before just a handful of major US cities were deployed, and the estimated cost per interested customer would still have been discouragingly high. Then how far out dreams of going beyond the available public domain data would still be! I decided to press on, though admittedly not in a particularly diligent or focused way; now I'm glad the burden is no longer on me. Between MapBox Satellite (beautiful and affordably priced) and MapQuest Open Aerial tiles (still available without charge), I no longer see much of a need for my independent offering.

I don't intend to shut down the existing URLs anytime soon, and may continue to dabble with the many interesting challenges of hosting terabytes of images and/or building a sustainable business. Most likely, I'll move the data out of expensive cloud storage to somewhere I can more cheaply (albeit less reliably) play with a much larger set. I'd also like to contribute the bits of tiling code and some of the (still-in-progress) parallel processing infrastructure to OpenAerialMap, which IMO has languished far too long and might benefit from a bit more of a "product"-like vision. I seem to remain all too adept at non-profit products, so perhaps pure open source projects are a better fit for my ideas anyway.

(Always happy for more consulting and freelance development leads, by the way. I love tackling hard problems, like designing custom maps or architecting CouchDB apps, working for honest people — like the continuing set of new clients I was blessed with this past year!)