[ed. note — I'm posting some lightly revised things I wrote a while ago but never finished.]

2015, and by rough approximation the thirtieth year of my life, was no /annus mirabilis/. It was (as far as I can tell) a good year, but it was a hard year.

It started with grand plans.

The chicken coop, aquaponics greenhouse, snail jars, and rabbit hutchery had all mostly come together. Certainly a few loose ends in each design, but seemingly minor issues that could be lived with. Things like, could use better thermostats, a demand-based automatic fishfeeder would still be nice, improve a bit of plumbing here/there kind of stuff.

Likewise, the yard was nearly full of perennial herbs and berry bushes and fruit trees. Sure there were a few plants needing replacement, and a few more to squeeze in here and there. And of course the annual challenge of getting the vegetable crops to sprout, thrive, produce, and be harvested at the proper time to properly perish of neglect on some shelf in the fridge. But altogether, it seemed like a lot of my hard work in recent years, designing and implementing "suburban agricultural systems" could wind down and start to pay back. The loose ends would simply be fun projects amongst other interesting ideas.

With these thoughts in mind, I ordered a small CNC off of eBay to help fabricate circuit boards to the control the animal's water heaters, make our lawn less water-wasteful, monitor fish tank parameters, and who knows what other devisements of saved labor might arise. (I also ordered some house crickets to breed, figuring a bit of entry-level entomophagy could be my final exploration in raising food on our neighbor-tempered quarter acre "farm".)

So the CNC arrived, we routed some smiley faces into wood and some test patterns into copper, learned how to lay out circuits in Eagle, and then got distracted with js-cnc after a promising start with a nifty parser generator — this was the only new personal software project of any significant ambition I ended up starting all year. (Well I guess in late December, I did start something that's tempting to make bigger. Also began a major refactor of an existing project at some point. I finished: none.)

I felt like I was finally settling in, but someone else in the family had a falling out with our home and/or my hobbies, etc. I tried to figure out if we could somehow fix things by putting a basement underneath the house/yard I'd been investing so much into. In lieu of that, when her parents visited for a week, we turned a back porch into a charming ??-season sunroom (electrical work: still unfinished) in order to add some square footage, somewhere the kids could do their schoolwork and assemble Lego.

But it didn't help. After I returned from a few trips to see my extended family, we decided to make a move. We found a different house before spending a single season with the sunroom. 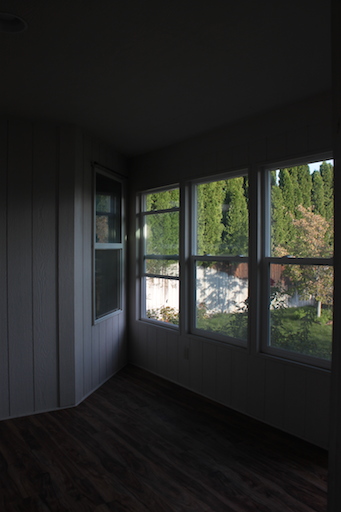 Moving seemed to set off a long series of small disasters — first four of our hens were killed by someone's loose dogs (I finished the fifth, which was severely maimed). We went on a long previously-scheduled trip, in the middle of our move. Our only-half-empty fridge got turned off the day we left, turning the old house — which we had imagined finding a buyer for the week we got home — instead into the smell of a half dozen species of death. Additionally, many of our potted plants had got completely dried out, while the cricket kennels had gotten soggy. After the house was habitable again, some mismatched touch-up paint turned into a whole room repainting project. The kids splashed half a bathtub into the ductwork of our new house. Then I broke a window getting a new aquaponics system into place, and in the month I spent waiting for the glass company to do something with my pre-payment in full, the greenhouse around the old system blew apart and all our tilapia froze. (The original $3.50 horde of now-obese goldfish survived, though… …yay?) We discovered our old house was likely worth pretty much what we paid for it plus not quite how much we had invested into it, before subtracting out the realtors' cuts.

Not to mention the disaster of taking a tenously-organized house, shoving it into boxes, and shoving said boxes into a not-even-ordered pile in the new garage. And doing this for like three (non-consecutive) months, while I kept realizing more things that need moving, fixing, finishing before handing the old house keys to someone else.

Also not to mention, paying two mortgages the same months my brain had pretty much decided that hibernation is the only coping mechanism left. And then discovering that the HVAC system in the new house should be replaced, but the home warranty company would prefer to keep the premium our seller had paid them than send out qualified contractors.

2015 was frustrating. All the things you're supposed to do before you're thirty i.e. old, like sell that successful startup you created or at least, I dunno, learn another foreign language before all your neuroplasticity gets replaced with nosehairs. Well they didn't happen. In a whole year I finished barely any books even, nor unleashed much previously-acquired knowlege onto any unsuspecting /status quo/.

More wild dreams died in 2015; I'm not sure if there are any left. Maybe growing up means each year accepting more and more deeply that I can't change the world. Only, perhaps, outlive it.

I have three boys now. The oldest is well through his first grade curriculum. The youngest is almost two. All three of them are bright, and diligent each in their own manner. A stable family life for them, whatever honestly-earned resources I can contribute, and some interesting activities to do together — as 2016 begins things are at least feeling better on these fronts.