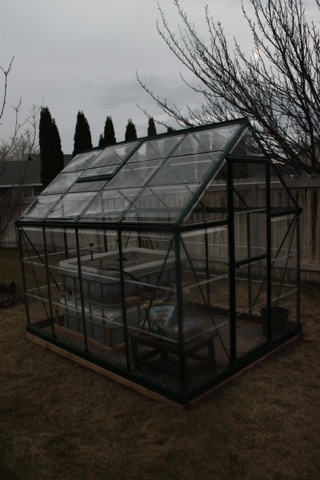 I built a greenhouse, not just because they are warm and bright and provide relaxing shelter from snow/wind/rain. I wanted to try aquaponics.

Considering the investment it's been so far, "try" might be the wrong word: I intend to grow yummy fish and yummy veggies for yummy years to come. Just finished up a few literal loose ends today: 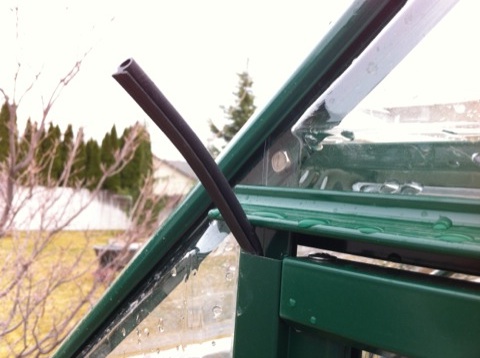 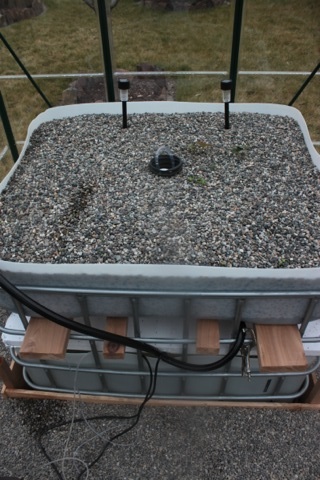 The idea of aquaponics is simple enough. It's pond-meets-plastic, a miniature ecosystem stripped down to its essentials. The natural cycle does wind along a bit of a scenic detour in aquaponics, though: the fish don't eat, directly, the plants that grow in their water. In a typical aquaponics setup, humans eat most of the vegetables and then wake up the next morning to participate in a global economy, out of which flows units of abstract value, some of which is then converted in exchange for fish food. Put food (and sunlight) in, get plants (and occasional fish) out. 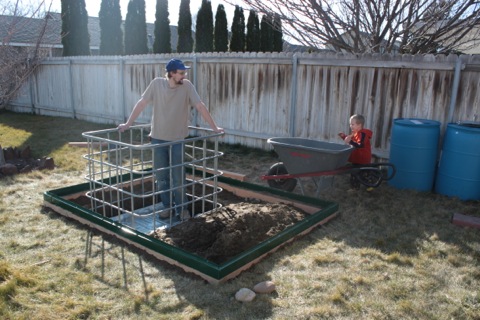 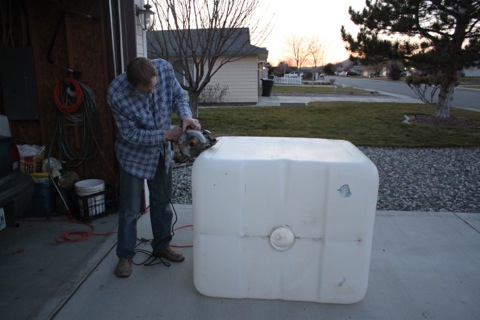 The plastic for my pond comes via a 275-gallon IBC "tote". It is cut in two, but aquaponics actually involves 3 basic components: fish, plants and bacteria. My infant system is lacking an established mix of bacteria colonies to convert the fish pollution into plant nourishment. So I'm starting off with less than $5 worth of goldfish and a handful of lettuce/spinach seeds. Both should be fairly resilient against the poor conditions that will exist until the biofilter between them catches up. 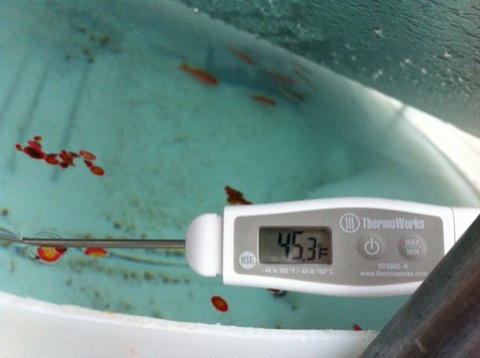 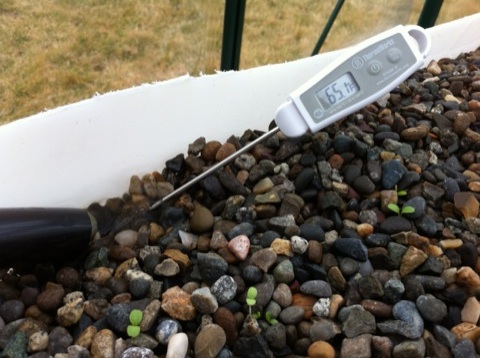 (Okay, so also we already planted some alfafa and bean sprouts from the fridge. Plus some volunteer basil starts and parsley shoots. Aaaaand some strawberries that had landed where they didn't belong. I think Hannah may have tucked some tomato seeds into the gravel grow medium too…. I'm only holding my breath for the lettuce and a majority of the goldfish to survive, but wouldn't be surprised if something else manages to make it.)

Aquaponics has been an interest for a while. It started, I suppose, with the chickens we got a few summers ago. We've really enjoyed watching our hens scratch around, feeding them our table scraps, and gathering their delicious, colorful eggs every day. We went from "townhouse with a garden" solidly into the "suburban agriculture" realm and it seems to be kind of addicting. The kids love the animals and it seems healthy to have practical pets to care for. 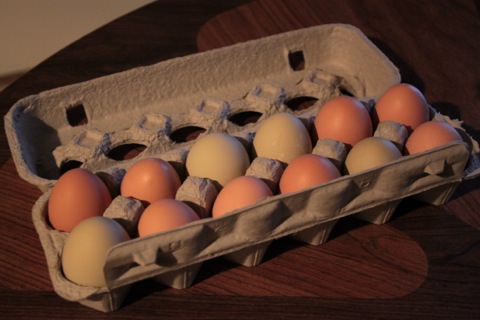 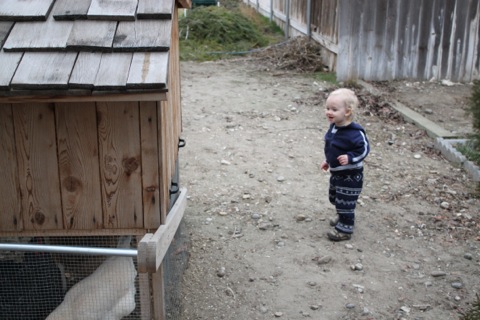 I suspect I first investigated aquaponics after seeing it mentioned on bbum's blog. I was intrigued by the idea of raising tilapia (a fish that even Hannah enjoys!) right in our own back yard — with lettuce and tomatoes as the waste products! Though a greenhouse has been a long dream of mine, I wasn't sure if we quite had the budget for it yet.

Then one day this winter, my friend Joe showed up with a armload of parts and began his own small setup in Room to Think's kitchen area. Long story short, my "intrigue" turned into "obsession" with aquaponics, and Hannah decided that it might be cheaper in the long run to just order the greenhouse already. 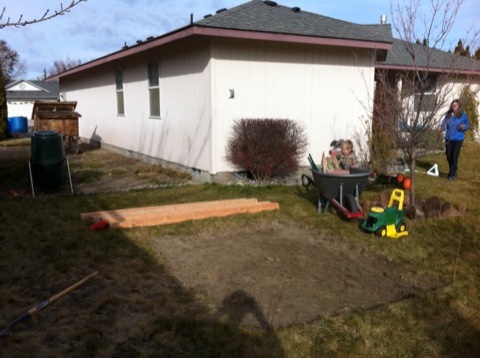 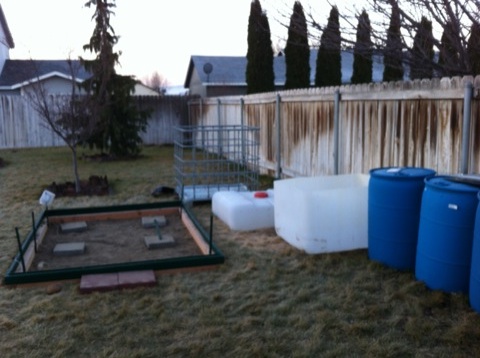 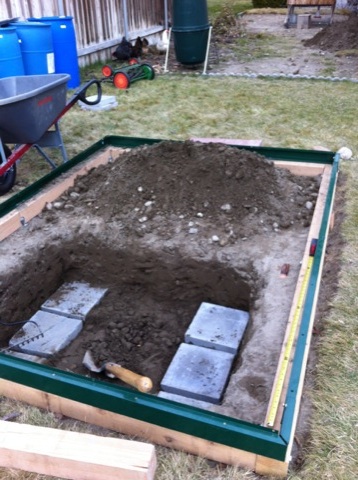 […everybody too busy assembling to take pictures…] 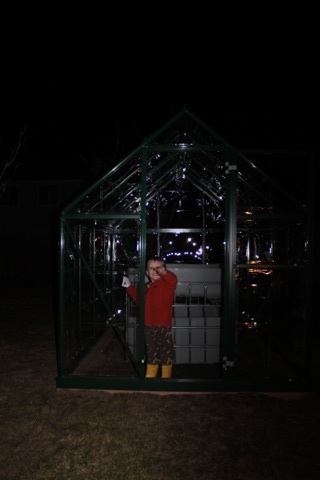 It was a lot of hard work to build, in a good way and I'm proud of how it's turned out so far. This post would be incomplete if I didn't thank Hannah and the kids for helping me build and Paul, Sean, Joe, Henrik, and others for loaning advice and/or tools. Also Brian at Beaver Bark, as well as the guy at Home Depot who started saying "see you tomorrow" when I checked out. (Let's just say that compared to those Retina MacBook Pros everybody was gushing over to get…well, I hope my greenhouse doesn't feel slow and stop holding charge after two years at least.)

Now the real work begins, I guess. I'm looking forward to this next phase of getting to prepare even better homemade food, made from more ingredients that grew up right outside our house. 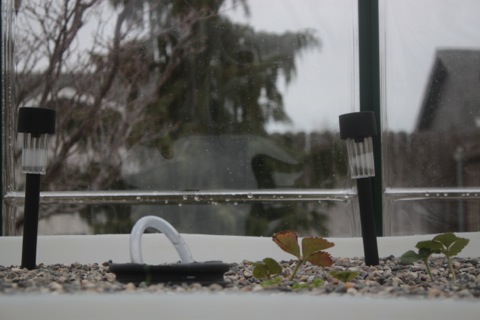