While I wait for a second balloon to arrive, I want to share a homemade extension to my mapping kit that's been very handy. 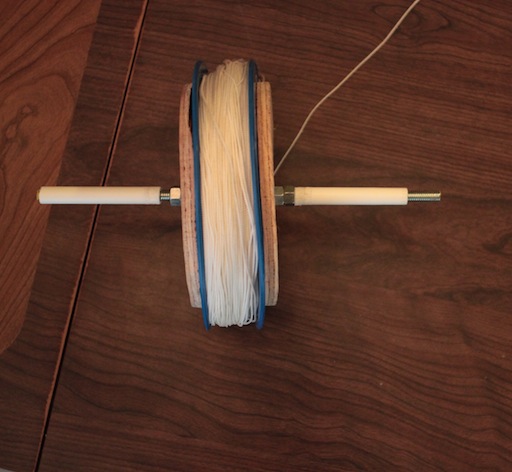 The PLOTS kits come with a generous amount of string and a winder that can let it all out nice and fast. It's the return trip that doesn't have such a great story out of the box.

Well, you put two minds to winding a thousand feet of string by hand, you can bet they'll have plenty of time to talk through a better way before the balloon is halfway down. And there's a good chance it will involve power tools. My father-in-law is a fine woodworker by trade, but given how quickly he was able to assemble this simple design despite my poorly-equipped workbench, I think anyone could make something similar with care: 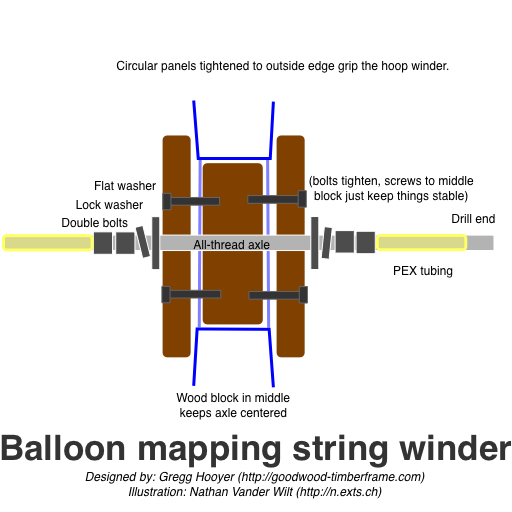 Using some plywood scraps, we clamped a length of quarter-inch "all thread" rod through the string winder. We turned some PEX tubing onto each end of the rod so we can let the string loose quickly, but left some bare metal on one end to chuck onto with my cordless drill for bringing it down quickly. 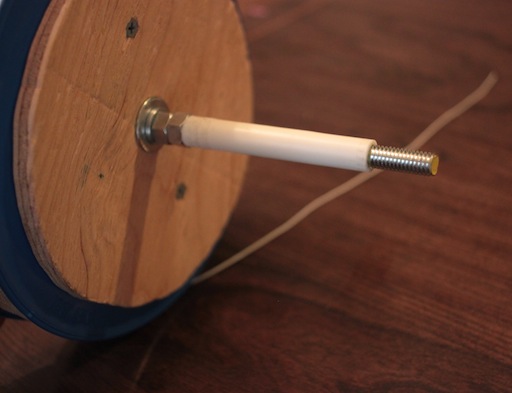 When the wind is helping the balloon pay off, the plastic tubing is a bit hard to brake tightly with cloth gloves, and the whole assembly can slip a bit fighting the rig back in. To get control on the release, I found sitting down and grabbing the reel between my shoes to slow it to a stop. To help the motor on the re-entry, you can have a helper walk forward from the winder with the string, pulling the line down until it's straight out about twenty feet and then "walking" the line above towards the winder with their hands. But as we've reviewed, balloons and strong breezes don't mix anyway — consider these tips for "just in case" and avoid the situation whenever possible.

With a normal "straight up" loft the assembly gives plenty of control going up, and plenty of power pulling back down. We've been able to pull off some relatively rapid full-height flights thanks to this powered winder — great for videos when you don't want the "there and back again" to get too boring.

Talk of which, I've uploaded a video showing a flight in and out in less than ten minutes with this string winder, in case you've ever wondered what it would be like to rock a fifth of a mile above the suburbs.