I decided that I won't accept a world where everyone owes the phone company around $1000 a year just for access to the internet between destinations. Especially not when (as marketed, anyways) the lion's share of that mound of cash is for fancy sounding things I have little use for. Like "Unlimited Audio Chat Minutes" and "Hidden Charges We Pretend Are Taxes".

Anyway, the industry codeword for the alternate universe in which this exists is: pre-paid. Or perhaps "live outside North America" but my experience there is limited.

I was originally planning on using AT&T's GoPhone service, as I could buy a $15–25 data package and just pay 10¢ a minute when using the audio chat app built-in to my iPhone. However, it turns out that, while in no uncertain terms must a carrier let you take your phone number along to another service, trying to move a number to a cheaper offering within a provider is not something AT&T seems to feel like doing.

By the time I got that issue off the table, GoPhone had changed their pricing structure so that the aforementioned data packages were only available with a more-minutes-than-I-use-in-a-year monthly voice plan. Effectively, they raised the price of their prepaid data service by $25 month and probably without shedding any tears either.

Note that this is still a slightly better deal than normal: if you were to buy iPhone off-contract — doesn't even need to be unlocked, since GoPhone is an AT&T SIM — just needs a configuration profile installed — you could save well over $350 a year with this plan.

I'm not going to attempt to extensively document the process. Some reps are very helpful and sympathetic, others pretty much will only do what the next step in their customer service flowchart says. The main trick is to avoid saying anything that rhymes with "iPhone" and firmly play your "do you want my money in exchange for a prepaid MicroSIM or not?" card. 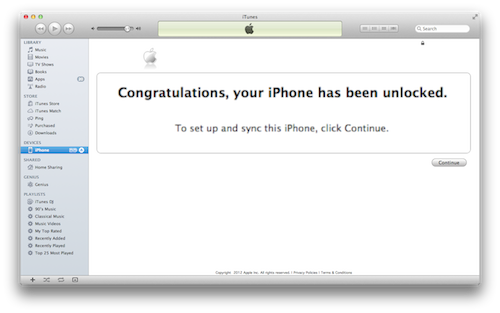 Since my goal was to waste not significantly more than $30/month on keeping my iPhone from being just an iPod touch. T-Mobile has the perfect pre-paid plan for this. I recommend this article outlining the process, and there are other guides. If you have an unlocked iPhone, it's not much harder to get the basics working than with GoPhone.

T-Mobile does not have 3G, as far as the iPhone is concerned. This may be changing, but that's a forward-looking statement with no promises attached. Three cheers if it comes to the Tri-Cities and I'm still on T-Mobile, but I'm not holding my breath meanwhile.

Fact is, EDGE works and I'm content enough with it. I've tweeted, emailed, looked up directions and/or gotten my bearings, even downloaded some decent-sized attachments. It's rare I really absolutely need to watch YouTube in the grocery store parking lot.

Oh, and the other reason I'm happy to be content with this situation.

Tethering ("Personal Hotspot") also works with this $30/month plan! I'm not sure if it's supposed to or what, but I sure don't feel guilty using it via EDGE speeds on an "Unlimited 4G" plan, and it's quite a nice perk.

Remember how I had to sort out my number porting issues? Well...at a certain point in the process I decided to stop wasting time on hold just to be told "you can't, not available, we can't" by most AT&T reps. I had a number I liked, so I've entrusted it to Twilio.

Using Twilio is gonna be fun. After a bit of disconcerting radio silence during the initial port (which they apologized for profusely and quickly remedied), they dealt with AT&T's bureaucracy and turned my phone number into an API. Yes, that's right. By gluing together REST calls and callbacks I can pretty much handle calls however I want. Forward to my phone, email myself voicemail as an MP3, turn on a teapot via SMS, set up a call center, or help a bazillion of us poor proles lobby Congress's switchboard that they PLS TO STOP RUINING AMERICA. (I've only personally set up the first one so far.)

There's a few downsides to the way I've currently got it set up, but I haven't even gone beyond the basic "Twimlet" stage of playing with it.

Current downsides, for the record:

However, with just a little bit more code, almost all of these can be solved at least as well as Google Voice handles them. If not much much better.

There's another alternative I may look into at some point, especially if I end up needing to work frequently away from someone's home/office/coffeeshop. (But again...even an EDGE connection feels about as fast as airport WiFi, and fetching the important stuff like API documentation, Wikipedia and such works well enough.) AT&T has a "tablet data" plans that give you a decent scoop of internet for a not-indecent amount of your retirement contribution. And Twilio has an iOS client library.

Q. Are you thinking what I'm thinking? A. I dunno Brain, but have you heard about Apple's new $350 iPod touch 3G?

Another option, if you don't mind a non-iOS device, is to wait for republic wireless to take over the world. (Thanks @hjon for getting them back on my radar!) They look like a great MVNO and I'd love to imagine that one day they'll even be operating their own towers, member-owned style. One can dream. I'm just not that patient in the short term. :-)