A month or two ago I got some spam from LinkedIn offering $50 in advertising credit on their site. Since I'd just gone back to freelancing — perhaps the ad credit "offer" was not coincidental? — I figured I might as well succumb.

Here's the targeting parameters I set: 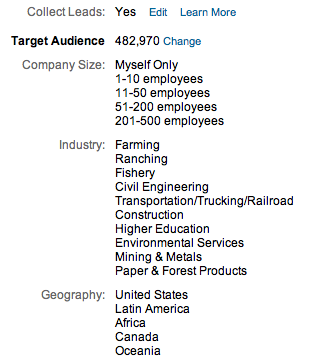 In the aforementioned Mac/iPhone shareware days at Calf Trail, we let Google run something like a buck a month in ads — search only, not their "extended network" which I've heard is pretty much dominated by spam farms and scraper sites that may even run up completely fraudulent clicks. It was kinda fun to see mine turn up when I searched for the terms, but my gut feel is that it did zilch for brand/product awareness or anything like that. Maybe should have advertised on complementary terms instead of people already in the market, but...who looks at ads if they can help it anyway?

The moral of the story is that I confirmed my bias, and remain a believer in ads being as much of a leech on me as a producer as they are on me as a consumer. For science.